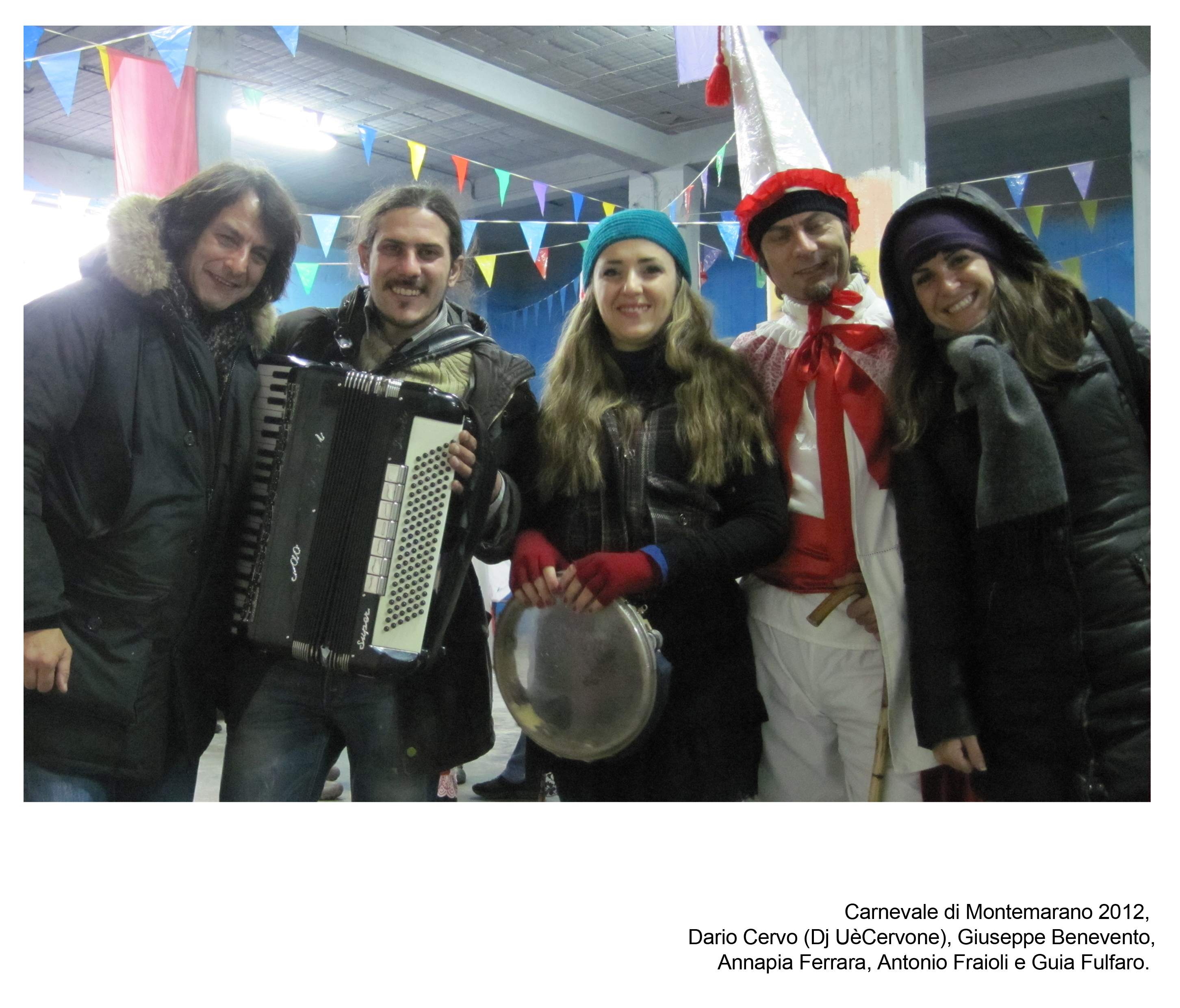 For more than twenty years of career as a DJ folk, I have selected and proposed traditional music coming from all over the world and especially from Campania. Every year I also produced my compilation (Sangennarobar) which contains my discoveries and my musical proposals. The Tarantella, the Tammorriata, the “dance on the drum” have always represented for me the true essence of the party, and bring them in my nights in the disco or in the squares has always been a satisfaction: people without realizing it dances and rediscovers their traditions, movements , as if time had never passed. I’ve always been a curious listener of traditional dances and when in 2010 I met Antonio Fraioli and he told me about what happened in Montemarano during the Carnival, I decided to participate. So, in 2011, very happy, I lived my first Montemarano Carnival. Despite the cold I did not stop for a moment, I followed the masks, I met musicians, I took pictures, recorded the sounds and voices of that Carnival so special and once I got home I started thinking about how to bring the “Montemaranese Tarantella” in my DJ nights . It was first of all to structure a Tarantella with its most significant musical passages in just a few minutes. So I turned to Antonio Fraioli who, an expert musician of the South Italian musical tradition, has formulated a version of the Montemarenese Tarantella that expresses all the charge and the language typical of this very particular musical form while respecting the tight schedule and the needs of a compilation . In this sense, out of respect for the city of Montemarano and the Tarantella Montemaranese, I would like to point out that in the CD I chose to indicate Antonio Fraioli as a composer of this specific version, but that the song was not registered at SIAE either in his name or in name of others, because the Tarantella Montemaranese is and must always remain the property of the only people of Montemarano. An important role was played by Annapia Ferrara, who introduced me to the delicate and complex dynamics of “Montemarano beat”, talking about the Tarantella, the dance, the rhythm, the players and the musical traditions of a country that I discovered to be truly rich in culture and living traditions.

So, with Antonio Fraioli on the violin, Annapia Ferrara on the tambourine and Giuseppe Benevento, accordionist of the Montemaranese tradition, we met in an studio recording in “Monte di Procida” to record the Tarantella Montemaranese for Sangennarobar. If the typical instrument is the clarinet, this Tarantella has the uniqueness of being performed by a violin and a woman with a tambourine. The Tarantella Montemaranese of Sangennarobar was born this way, a version that wants to be a tribute to the city of Montemarano, its Carnival and its people, to bring his party everywhere and make the Tarantella dance and appreciate even in different contests. I therefore want to thank Antonio Fraioli and Annapia Ferrara for telling me about Montemarano, showing me the videos and listening to the Tarantella. Giuseppe Benevento, for accepting to play and record a version specially created for my compilation.

I associate myself with Annapia Ferrara and Antonio Fraioli who wish to thank all the “masters of the montemaran tarantella” who have created, handed down and which continue to perpetuate this beautiful tradition, the “Museo etnomusicale of Montemarano”, with special thanks for Battista Salvio and his entire masquerade. 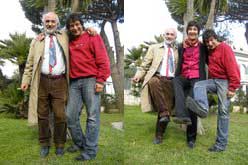 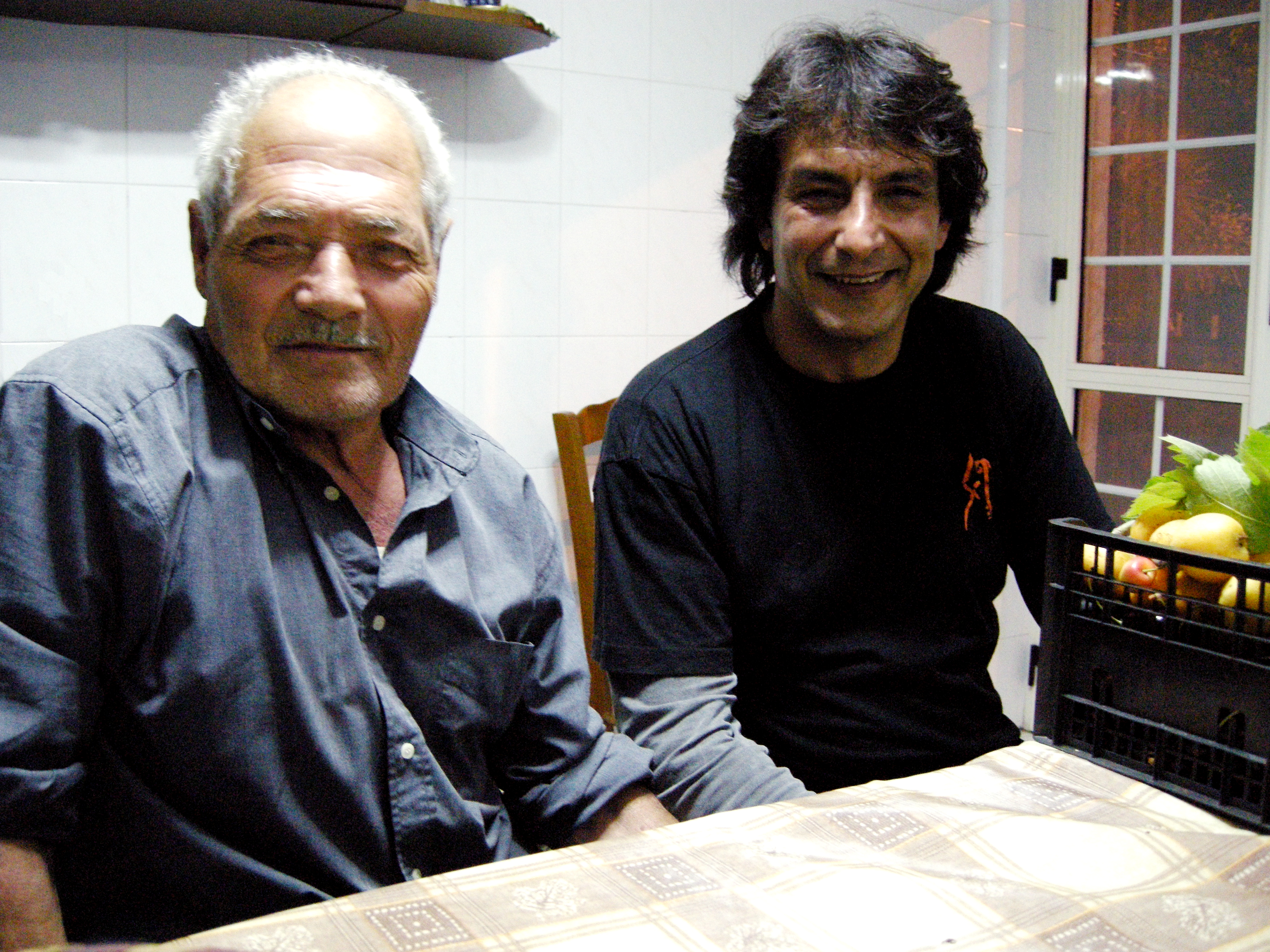